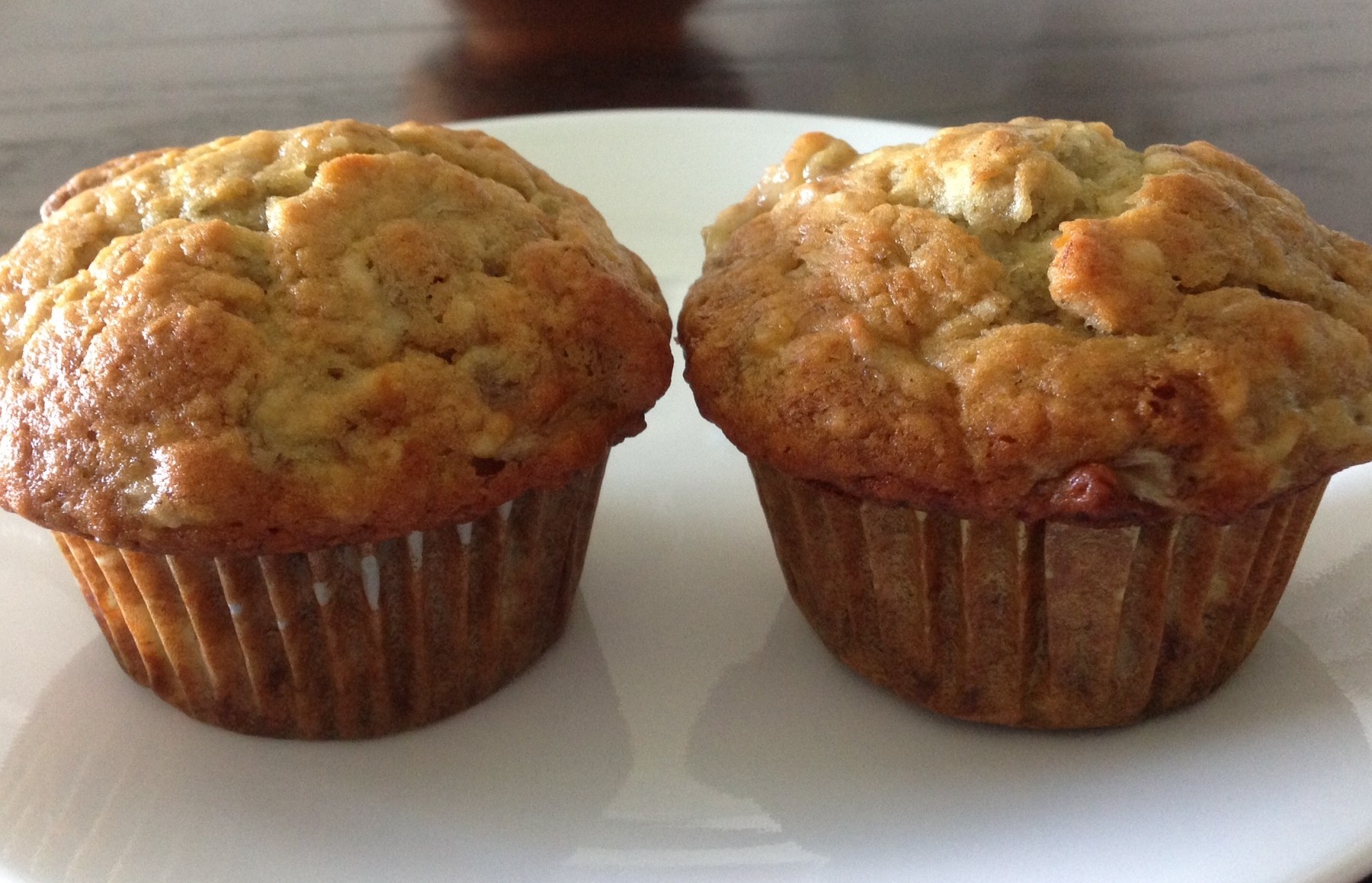 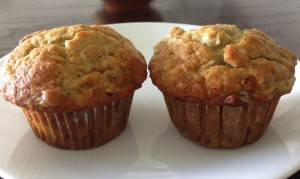 These are quick and easy to make and taste delicious for breakfast or morning coffee. I tend to switch around ingredients depending on what I have in the cupboard but the basic recipe is my favorite. A friend asked me for the recipe so I decided to add it to our blog for posterity, then it can be shared by one and all.

If you only use 3 bananas you will need to add a little milk or natural yogurt to make the mixture a moist drop consistency.

I made these early this morning and I was still half asleep and forgot to photograph the stages or even the muffins until there were just the two left! They really are simple to make so have a go and then post your photos.

Today I made the muffins but had run out of butter. I substituted coconut oil and the flavour was really delicious. I will be using coconut oil to make these in future! 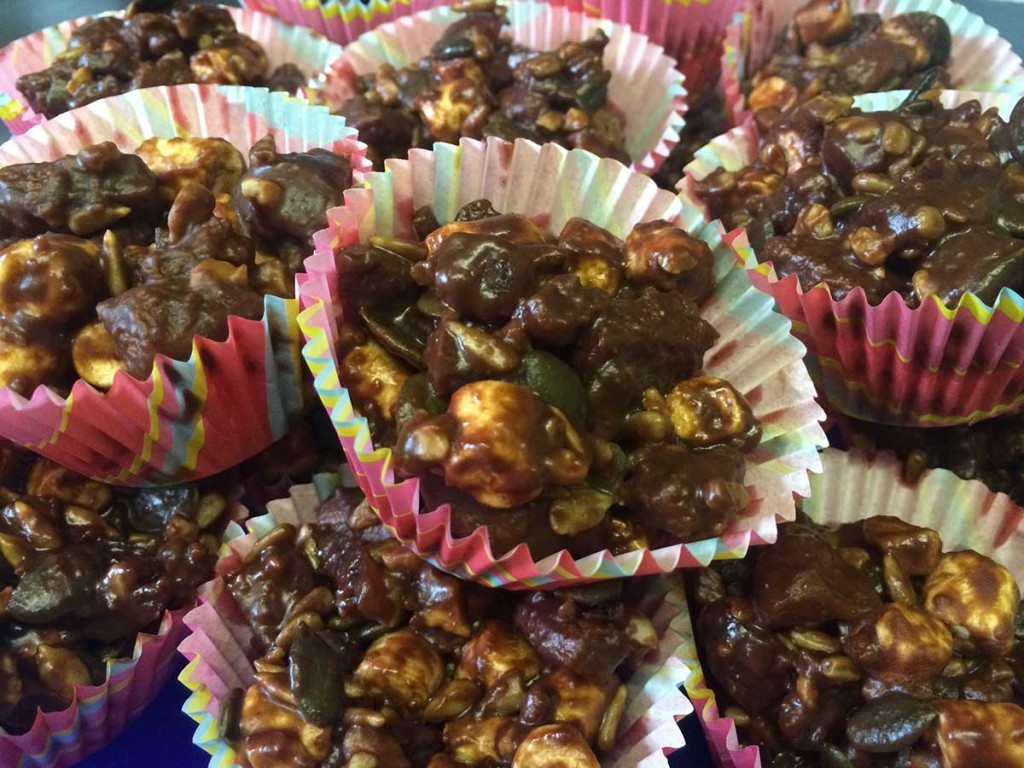 Okay, so that title might not be entirely inspiring, but it’s more polite than what my husband calls them 😉  These sweet treats are a great way to use up all those leftover baking ingredients!  Found yourself with some leftover chopped nuts, dried fruit or glacé cherries?  Just throw them in! 🙂  Same goes for the end of your muesli, rice crispies, packet of biscuits, or that chocolate bar at the back of the cupboard!

I’ve been making variations on this recipe for years.  I usually make mine in cupcake cases so that if they end up a bit crumbly it doesn’t matter 🙂  Other people make it as a tray and chop it into slices.  Sometimes I use just a few ingredients, other times a little of everything!  So my recipe is for the basic chocolate mixture and then suggestions for other ingredients 🙂

I usually manage to make about 24 of these sweet treats from this recipe 🙂  The more ingredients you add the more you’ll make, but the more likely they are to fall apart (not exactly a problem, just not as easy to eat!) 🙂 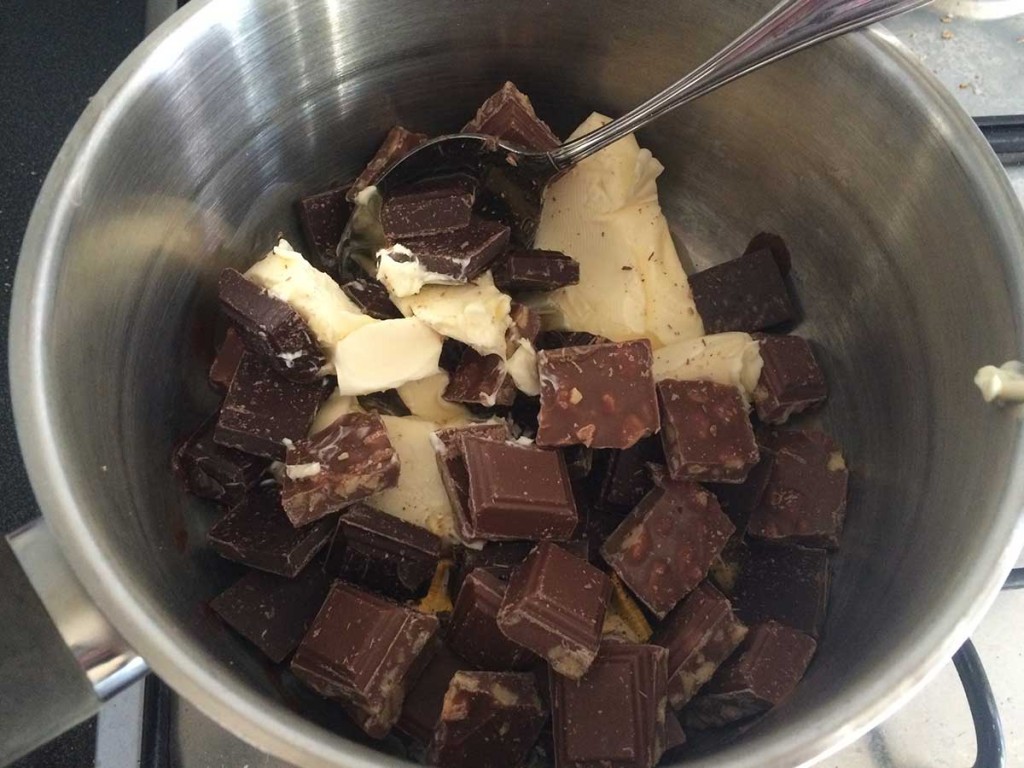 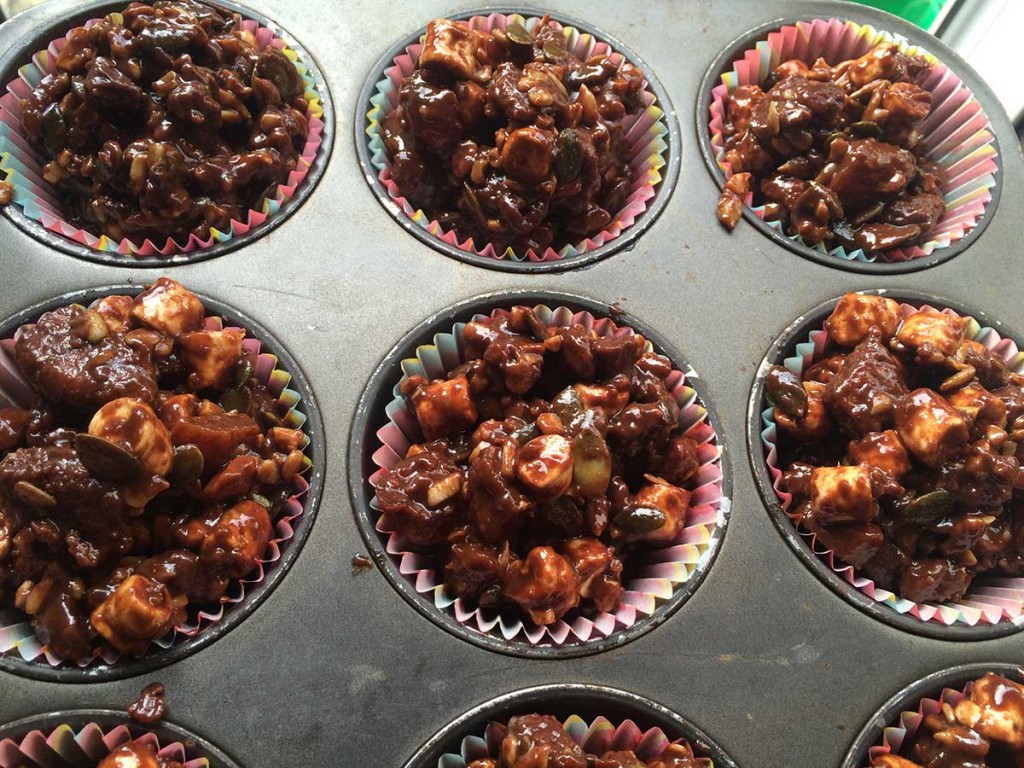 Variations are easy!  Start with the Basic Rocky Road recipe, take out some of the biscuits, and replace with your favourite sweet treats 🙂  Here are some more suggestions for great additions:

Basically, anything will go in these and make awesome treats 🙂  Go for super indulgent chocolate madness, or pretend to be healthy with some dried fruit and nuts 🙂  What are you going to put in yours? 🙂

Chris and I are a little addicted to Hooters wings when we’re in Vegas.  I wanted to make some at home to soothe our cravings whilst in England, and discovered that all the recipes I could find involved deep frying.  I wanted something a little healthier and combined a few recipes and tweaked until I was happy with the results 😀

I separate the wings and skin them, then dunk them in milk, coat them in my special breading mix, and bake them.  Once they’re cooked through and all crispy on the outside I drench them in hot sauce ready to serve with some celery and ranch dressing 🙂 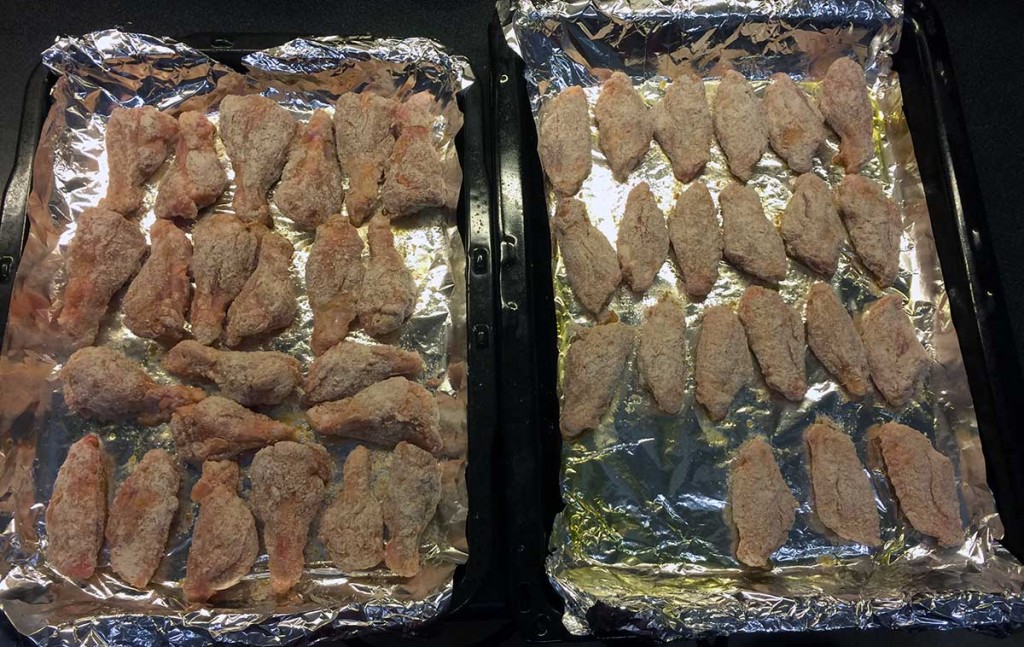 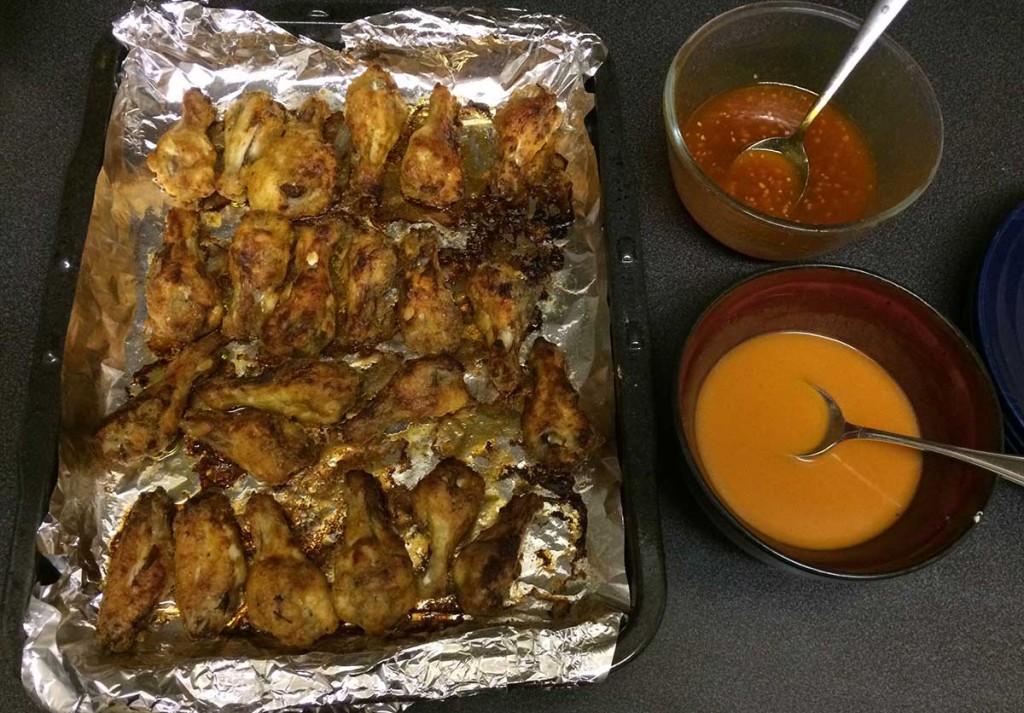 Changing the hot sauce can make this recipe taste dramatically different!  Use your favourite or try out a new one! 🙂  Taste the hot sauce first as some may not need much butter, others may need a lot!  Sometimes I add some chopped garlic, black pepper, or other spices to the butter & hot sauce mix for a change too 🙂

Pancakes are something I used to make fairly regularly when our daughters were still at school, a hearty and healthy breakfast to start the day.  I hardly ever ate them because, by the time I had cooked enough for three girls and my husband, I really did not want to cook another for myself.

Nowadays I make them very infrequently and usually have to look out my recipe because I have forgotten the proportions. So, here we have my favourite recipe for English pancakes – in Florida we generally eat American buttermilk pancakes. My personal favourite filling is gently simmered apples with cinnamon and a dollop of Greek yogurt on top.

If you would like to make the apple pancakes you will need to prepare the apples first. 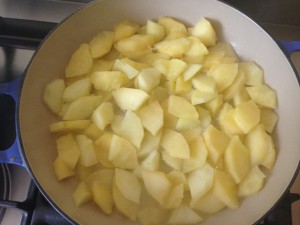 Apples at start of cooking

These braised apples are wonderful put into small individual casseroles, topped with a very small quantity of crumble topping and baked in the oven for about 15 mins to brown the top.

Serve as a dessert with Greek yogurt or cream. Oops I digress! Back to the pancakes! 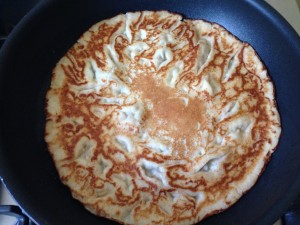 Impossible pie? No, it is very definitely possible and probably the simplest dessert I ever made, just mix it all together, pop it in the oven and presto! Yummy crispy coconut macaroon top, a soft pie base and custardy centre.

This recipe is one I used to make regularly before Stuart became diabetic at which time we tried to reduce the amount of sugar and carbs we consumed on a daily basis so this one dropped off my “to cook” list. However, a few weeks ago we had dinner with friends we had not seen for years and were served this pie, which Angie had cooked from a recipe I gave to her in the 1990’s. I was originally given the recipe by an American friend we met in Liberia in the late 1970’s. Over the last weekend discussing food with Katherine and Helen I said that I would look it out and let them have the recipe which is what started this whole recipe blog. 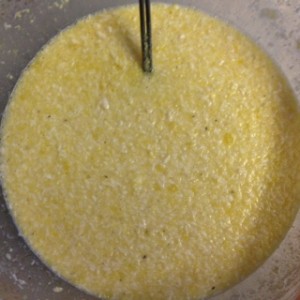 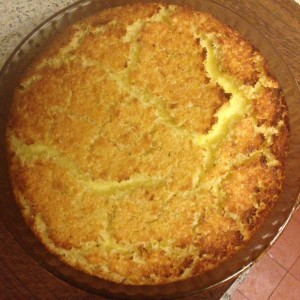 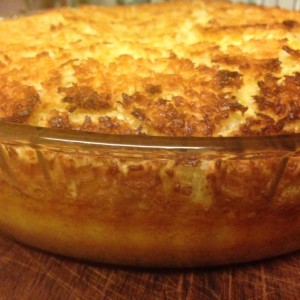 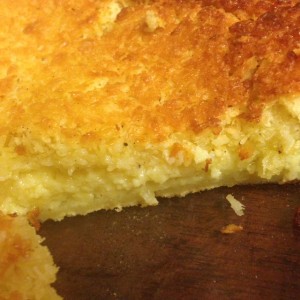 Picture one shows the ingredients well mixed and the other 3 show the finished results. When it comes out of the oven it is light and fluffy and the coconut is very crispy but as it cools the custard settles as you see in the sliced pie.

Nutrition (per slice when cut into 8 slices)

The original recipe I used to make had 1.5 cups of sugar but this was extremely sweet and still is with just the one cup, in fact I will try again reducing the sugar even more.

I have ideas to make several variations of this recipe. My first will be to omit the flour, reduce the sugar and make individual coconut macaroon topped desserts in brulee style dishes. More on this in future but first I need appropriate dishes!

I decided to try out this recipe to celebrate Pi day yesterday and after I finished mixing up the ingredients it looked rather, well, impossible that this liquidy gloop was going to turn into that pretty pie!  So I took a quick video to show the consistency so that you could all trust the recipe 🙂

I wouldn’t recommend trying to make this in a pie dish with a removable bottom (I swiftly switched dishes when I saw the consistency!)  However, it really did turn into a delicious pie! 🙂 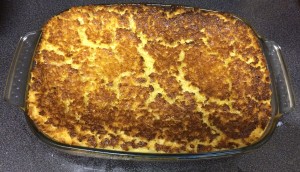 I would recommend serving it whilst still warm, but giving it 15 minutes or so to cool once it comes out the oven – our second helpings were much easier to dish up than the first, rather too eager, slice 😉

Welcome to our new blog!

We will be sharing all our favourite recipes with you so that everyone can enjoy our cooking creativity, and so that we don’t lose them! 🙂